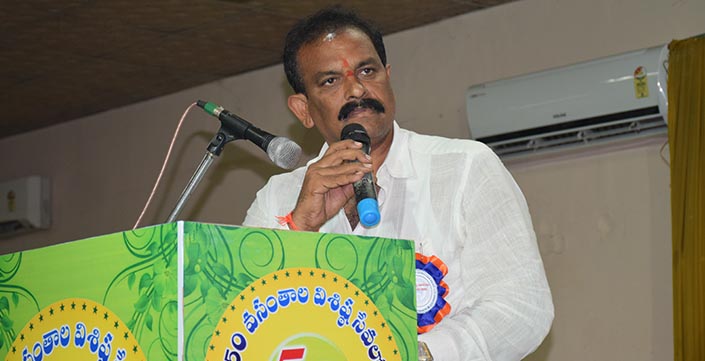 Five decades of organized dairying in Krishna District was completed by 2016. I am recounting how the dairy industry in the district was accomplished its task in balancing the qualitative services.

Krishna Milk union is a premier District Dairy Cooperative in Krishna District. It has 529 Registered Member societies apart from Milk Associations across the District with a well-knitted milk procurement and marketing network. It is being managed by member producers instilling more cooperative spirit among the dairy farmers.

The dairy industry in Krishna District as also nationally, had significant strides during Operation Flood program of the National Dairy Development Board. In 1983, the Anand pattern Dairy Cooperatives were replicated to eliminate middlemen in dairy business and empower millions of rural milk producers. The farmers are actually managing their own business, controlling procurement, processing and more predominantly marketing of their surplus milk and also wide-ranged value added milk products under an institutional structure "Dairy Cooperative" to realise the maximum share of consumer rupee. The surplus manpower inherited from State Govt. has put the Krishna Milk Union on the verge of collapse during nineties. The sincere efforts made by the dynamic management and the financial assistance extended by Dr.Verghese Kurien as Chairman, NDDB bailed the union out of the crisis and indeed shaped up for bright future. The Union is proud of achieving an amazing turn-around in all spheres to stay on progress. The Milk Producers of Krishna Union are indebted to Dr V Kurien forever.

As per the recommendations of Cooperative Reforms committee headed by eminent leaders like Sri Mohan Dharia, Sri Jain and Father of White Revolution Dr V Kurien, the Mutually Aided Cooperative Societies Act was formulated in 1995 by the Central Government. Andhra Pradesh State was incidentally first State to adopt it during the Chief-Ministership of Dr N T Rama Rao. The Mutually Aided Cooperative Act enabled the farmers to enjoy the fruits of the democratic freedom in achieving the Gram Swaraj as preached by Mahatma Gandhi. The Krishna milk union converted into APMACS Act in Aug 2001…. the transformation began.

The Dairy cooperatives are only the genuine producer institutions and emerged stronger evolving governance and method. The farmers are benefitted by the most vital function…marketing…the revenue earner. Krishna Milk Union has built up a strong base for the development of rural economy by organizing dairy cooperative on sound lines. The Krishna Milk Union is pumping on an average Rs. 250 crores annually to the rural economy in Krishna District by milk purchase from the producers. Dairying has become a dependable source of livelihood to the rural poor, marginal and landless labour all round the year. It is providing succor during the natural calamities. The dairy cooperatives have become nucleus for the village development.

The after promulgation of the Ordinance excluding the Dairy Cooperatives under MACS Act in 2006 and the High Court of AP and Supreme Court judgment quashing the Ordinance witnessed several vindictive acts resorted by Government Departments on Krishna Milk Union on various fronts. These are however overcome by the Krishna Milk Union by strong will and cooperation of the milk producers.

The Krishna Union is rendering value added input services to the dairy farmer such as Fodder Development, subsidized cattle feed, Animal Health Care services at door step, modernization of their cooperatives with computerized Automatic Milk Collection Units besides fort-night payment timely to their produce. It is also creating employment throughout the year to thousands of different strata in rural and urban. It is on the path of overall progress creating additional infrastructure in service to the milk producer and consumer.The dairy products rolled out from this Union under 'VIJAYA' brand have good clientele.

The phenomenal growth of the Krishna Union in facts and figures during the last three decades under are at glance in the subsequent pages. The profits began to register from 2009 and grew up year after year with total commitment of the Board of Directors, Producers and employees of the Union in the organization in the midst of stiff competition from dairies under private section.

The Krishna Milk Union wishes to progress further, badly needs an appropriate policy support and guidance from the State Government towards Animal Husbandry and Dairy Development programmes. The Apex Bodies created to safeguard and promote the interests of the dairy cooperatives also to be positive in their attitude towards the Milk Unions under APMACS Act.

The aspirations of the member producers have been fulfilled by the Krishna Milk Union to a greater extent. However there is still much to be done…..

Please have the insights of this coop union and the milestones it crossed.